Those are the six fundamental questions in journalism that you want to answer when you report on a story, no matter the medium: online, newspaper, radio, or television.

The first four are very straightforward most of the time, but the last two are where the nuances lie – and that’s why they are so important to ask. And those are precisely the ones I was asked the most when I joined Runtastic. “Why did you decide to apply and make a career change?” “Why did you decide to move away from Journalism?” “How did you change your career from being a Journalist to working as a Talent Sourcer?”

As the saying goes, old habits die hard. So I will try my best to answer all six questions that I have mentioned in the beginning of this blog post, but I will focus on the last two to explain how my journey took me from Journalism to Human Relations.

How I started in journalism

I’m originally  from Brazil and have a passion for football—that was my main motivation for pursuing journalism. With little to no skills as a player, I never had a shot of being anything other than an admirer of the game. So when the time came to choose a profession, I went for something that would combine my love and curiosity for the game.

I graduated in 2012 and started working as a journalist for a small regional newspaper in a Brazilian city called Santo André, next to São Paulo. After a couple of months, the sports section called me to fill in for an absence for a month. That was probably the longest month of my life because it ended up lasting three years! 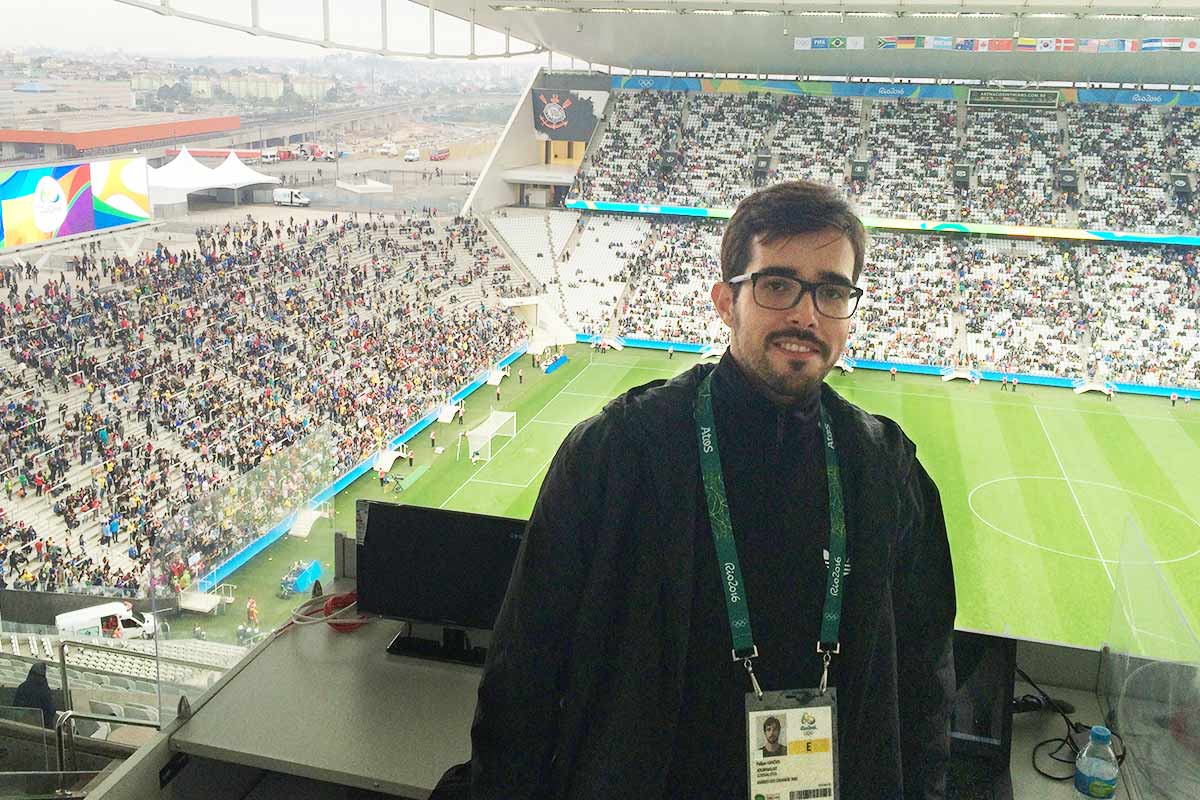 During this time I learned a lot about the profession: interviewing, finding sources, doing research, developing contacts and of course, writing. My experience was filled with several highs, including working during a World Cup and in the Olympic Games. In 2014 I covered Costa Rica’s astonishing campaign which ended in the quarter-finals. In 2016 I reported on football matches held in São Paulo – like Brazil 2×0 Colombia in the men’s semifinal. These are some incredible highlights!

But after the Olympics, I decided to pursue another dream of mine: going abroad. In 2017, I decided to quit my job and came to Austria to obtain my Master’s degree. I studied Sport, Culture, and Event Management in Kufstein, Austria, to get insights on how things were on the other side of the mic.

Unfortunately, I didn’t get the chance to  work in this area. After I graduated in the Summer of 2019, I was still improving my German (a lifelong journey) and at the beginning of 2020, we all know what happened: Covid-19. One might think that all this work was for nothing, but it really wasn’t. In this journey I grew as a person, I learned so many new things, I met my lovely partner and we started a life together when we moved to Linz.

Working at Runtastic – how my career changed

As Rocky Balboa would say, the world ain’t all sunshine and rainbows. I would be lying if I said it was smooth sailing after getting my degree. I faced many challenges and had to adapt at an incredibly fast pace to keep up with all the changes that occurred in my life in the past three years. And this all prepared me for where I am today: Runtastic.

I knew Runtastic as my partner tracks her runs with the adidas Running app, but at that point I wasn’t a user myself. Before applying to my position, I was reading through the website to gain a deeper insight into the company and what really caught my eye was the Runtastic and adidas’ mission.

“Through sports, we have the power to change lives.”

This is something I always believed in and I saw with my own eyes in Brazil during those years I spent as a journalist.

When I decided to apply for the Talent Sourcer position at Runtastic, I had mixed feelings. First, the excitement, second, the doubt. I asked myself if I really had what it took. After a second look at the requirements and tasks that I would be performing, the feeling changed to confidence:

I realized I was more than able to do this role.

I knew that I would have to learn a lot, especially the processes and procedures of Human Relations. It would be a completely new path, and an entirely new world. I found it was important to ask these questions to myself:

These are important questions to get a clear picture of what exactly you want to get out of your next job.

I pondered over those for some time and these were my key takeaways:

After considering these points, I was sure I would be ready to face any challenges this change would bring  and decided to hit that green “Apply now” button.

I’ve already learned so many things, like what to look out for when we receive an application and what characteristics to look for during an interview. And I know this is just the beginning—learning is, after all, a lifelong journey!

For some people, having a sense of purpose in their work can make a world of difference to how they approach a job. This, combined with the skills that I had and a willingness to keep learning new things, gave me a lot of confidence to show the Human Relations team what I could bring to the table.

This is my journey. What’s yours?

Do you have the skills and the passion to join Runtastic? Take a look at our career page and apply!

Cycling Fitness >> Base Training to Get in Shape

When Patients Choose to End Their Lives

A Cyclist on the English Landscape